From early in the 1990’s, aluminium composite panel (ACP) became a standard material for medium and high-rise buildings across Australia, revolutionising the building sector by providing a low-cost, aesthetically pleasing skin or layer that was easy to attach to a building’s framework.

Cladding is technically any layer of material applied over another to provide a skin or layer, however in the construction context refers to material used to cover all or part of a building’s exterior that in itself is not structural or part of the frame.

For high rise construction, the National Construction Code (NCC) forbids the use of any external cladding which does not prohibit the spread of fire. The NCC requires compliance with Australian Standards for testing of construction materials, and the current standard aligned to the spread of fire and external cladding is AS 1530.1−1994 while for low rise these standards differ and other standards may apply such as AS 1530.3-1999.

In recent times, highly-flammable Aluminium Composite Panel (ACP) cladding has led to major fire damage – as evidenced in cases of the Lacrosse building in Melbourne (2014) and the Torch Tower in Dubai (2017) – and even loss of life as in the Grenfell Tower fire in London (2017).

The use of cheaper imported ACP cladding with a PE core on high-rise buildings is at the heart of the current problem. While Australian suppliers were aware of the fire risks associated with this cladding, a demand by developers, builders, sub-contractors or suppliers for a cheaper product ensured their continued use, made easier because of Australia’s lax, ambiguous building standards.

As a consequence, there is demand for changes to the NCC that will tighten regulations on the use of external cladding in new or refurbished developments, issues currently under review by the Australian Government following a recent Report into aluminium composite cladding handed down by the Senate Economics References Committee1.

Across Australia, ACP is frequently used for decorative effect on building facades and signage. ACP is by its construction method a ‘sandwich panel’, and not all sandwich panels are considered hazardous.

Sandwich panels are used in construction where light-weight sheeting is required. Their use can be external or internal on walls, ceilings, roofs or for signage. Some panels are flexible and can be moulded to shape for architectural design features. Their benefits include an ability to stop wind and rain entering a building, sound and thermal insulation as well as varying levels of fire resistance.

The panels comprise external inside and outside skins with an inner core comprising of some form of insulating material.

The external surfaces composition can include:

The inner core composition can include: 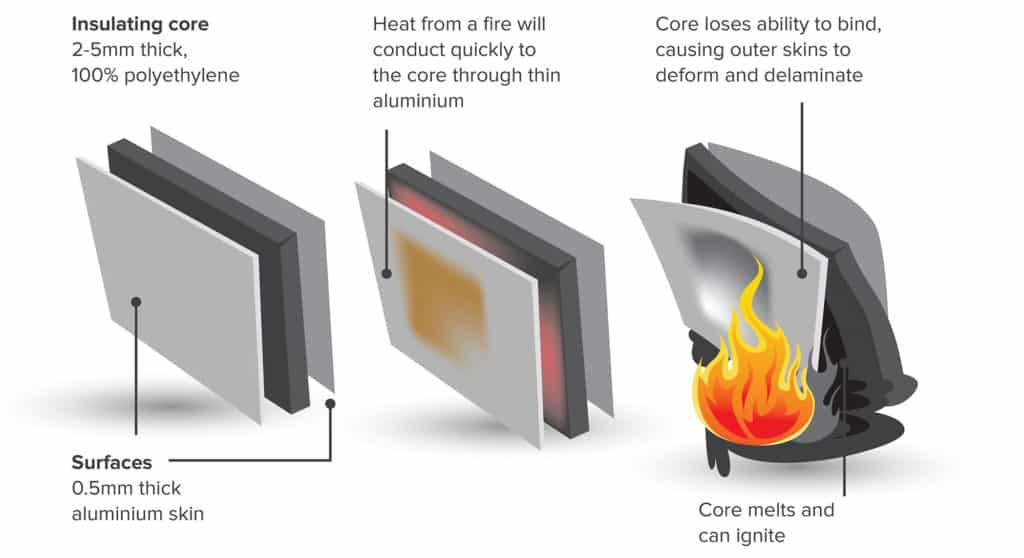 Please note: the above table is indicative only, and more detailed information can be found at:
1. http://www.csiro.au/en/Do-business/Services/Materials-infrastructure/Fire-pass-scheme/Certificates-of-Assesement;
2. http://www.abcb.gov.au; or
3. https://certmark.org/

Our position at Strata Community Insurance is that we will quote on a case-by-case basis with cover for certified and compliant strata complexes.

Strata Managers can support their executive committees by providing information on some simple steps to identify the type of cladding used on their buildings and determine if they need to undertake rectification/remediation to remove/replace the cladding, including (but not limited to):

Please note the information in this article is general in nature and does not take into account your objectives, financial situation or needs. You should consider obtaining independent advice before making any decisions based on this article.

The Value of a Strata Manager