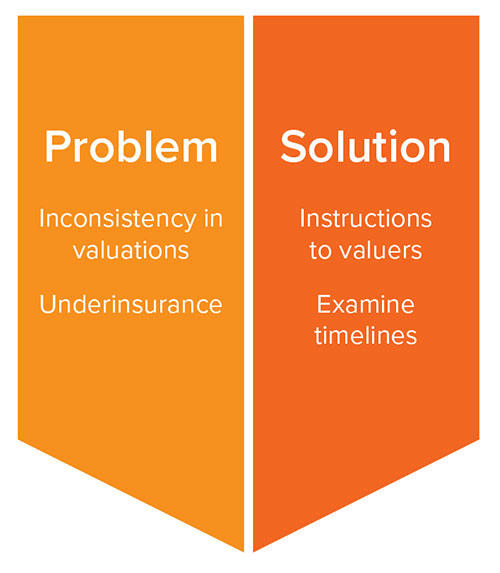 In this paper we consider the following items in relation to Strata Building insurance:

Many research papers have been produced documenting that underinsurance Is a maJor problem In Australia.

Despite the fact legislation requires the Corporation, Owners Corporation, Plan or Company (“Body Corporate”) to Insure the building for rebuilding and/or replacement value, it is very lIkely that even with a valuation, the correct sum insured has not been arrived at due to some key timelines not being taken Into account.

This brief paper is designed to alert the community to some key principles and considerations, in relation to strata Insurance, that will provide insights designed to assist owners make more Informed decisions about engaging a valuer, including points to consider in scoping out what is required of the valuer and thereby ensuring buildings are insured for as full a value as possible to reduce the effects of underinsurance

In all States and Territories the Body Corporate must insure the building for reinstatement and/or replacement value, generally to a condition as new. Legislation defines what property comprises the building, and also provides that removal of debris and professional fees need to be taken Into account in this value.

How is this value arrived at? By utilIsing the services of a suitably qualified and skilled valuer who can arrive at a sum Insured for insurance purposes, not “market value” as some owners often mistake.

In certain jurisdictions there are requirements to have the building valued at least every five years. Whilst other jurisdictions maybe silent on any such requirement, it is considered best practice for the Body Corporate to insure for rebuilding and/or replacement value by utilising the services of a valuer on a regular basis.

(a) Detail the key timelines you want the valuer to utilise in the calculation of the sum insured, as outlined under the “Key Timelines in the Calculation a of a Sum Insured” section below.

(b) Skills of the valuer

(i) Is the valuer skilled at only small buildings of say $3m, or capable of handling buildings valued in the region of $150m? Request an example of their work based on a similar building.

(ii) Heritage Listing falls into a number of categories being Local Council, State Government and Federal Government. The valuer is going to have to research what aspect applies and this will increase the cost of the valuation.

(c) Obtain a quote in relation to the scope and remember that the cheapest is not always best. Consider the cost of the valuation on the basis of cost per lot, rather than a total for the building!

(d) Lot interiors must be taken into account, especially in older buildings where refurbishments would have been carried out to lots over time. Many valuers do not look inside the lots and failure to do so could result in an under calculation of the replacement value, due to it having increased as a result of these refurbishments.

(f) Zoning requirements local councils make changes to zoning requirements over time that would have an impact to the cost of reinstatement following a loss. Consider, for example, a strata building that currently has no dedicated car park, but the council have made it a requirement that in the event of a total loss to the building a car park needs to be built. This would have to be accounted for in the valuation, to reflect the increased cost of rebuilding and/or replacement and thereby ensure the building is insured for full value.

(g) Known hazards if you are aware of other hazards that may impact the rebuilding process, such as asbestos materials used in roofing or in other applications within the building, or that the site may be built on re-claimed land (potential pollution implications), these should be outlined in your instructions to the valuer.

(h) GST sometimes a contentious point, but pursuant to legislation it may be prescribed to be included as a part of the valuation process, and it can have significant impact on cash flows during a rebuilding process. GST is payable on building costs, plant and equipment and professional fees. However, the manner in which a claim is settled may determine whether it is possible to claim the GST back as an input tax credit.

(i) Nature of the event the cost of replacing or reinstating a building can vary greatly depending on the nature of the event. For example, where a large catastrophe event such as an earthquake or cyclone causes a surge demand on materials and labour, leading to costs escalating. Some valuers will estimate a suggested cost escalation for catastrophe events, and this can be used to purchase additional cover under the Catastrophe section of the relevant policy.

(a) It is important to establish:

(i) What level of cover the valuer has in place relative to the sum insured of the building, as an error could be costly. By way of example, in the Case Study below the sum insured was originally calculated at $93,487,487 and we re-estimated the figure at $5,410,940 higher, so it would not be helpful if the valuer carried only $1m of Professional Indemnity cover.

(ii) What disclaimers the valuer will place in the report you will receive.

(b) Once you have this information, you and your Body Corporate can make a commercial decision on whether the level of protection is adequate, and f so, whether to accept or renegotiate some of the limitations applied within those disclaimers.

Key Timelines in the Calculation of a Sum Insured

It is vital to ensure escalation of costs has been correctly calculated from the date of the valuation, to the eventual end of the rebuilding/reinstatement period the valuer has considered appropriate for the building in question.

With this in mind the valuer should clearly show the following periods as a minimum, when arriving at the sum insured for rebuilding/replacement:

A case study has been created from a valuation that was presented to us as a part of the underwriting process for a specific scheme in NSW. We have used this to illustrate the importance of the timelines mentioned above.

The valuer, having calculated a base building valuation, made an allowance of 2 years escalation for planning, tendering, construction and fitout. In arriving at their recommended sum insured, they applied this 2 year escalation period from the date of their valuation.

Table 1 replicates the major headings of the valuation provided, and we have included a ‘Revised Value’ column to quantify the financial impact of such an approach.

Note: In SW legislation provides for the escalation period of 18 months to apply from the first day of the policy period. This would be inadequate for many schemes, and instructions to the valuer should include a request from appropriate time periods, assuming a loss occurred in the last days of the policy period.

It is important to appreciate that there is no single format that valuers utilise in presenting their data. This example is no different and we are not suggesting that the layout is best practice. However, It is important to understand the framework they have utilised and the effect the miscalculation of timelines has, in our view, on what the actual sum insured should be to minimise the risk of underinsurance. 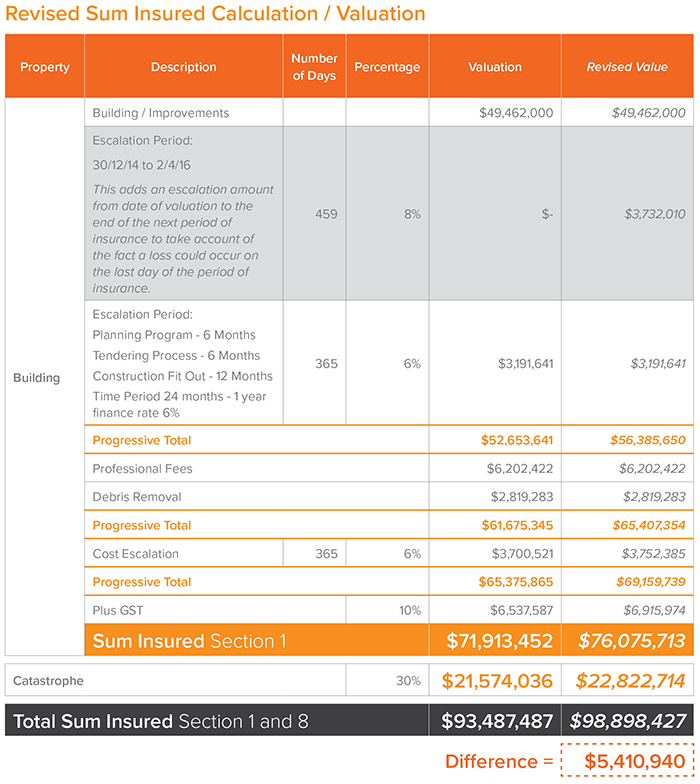